And then one day

THIS BLOG HAS BEEN OPENED FOR ANY BELIEVER TO DISCUSS RELIGIOUS MATTERS, SO IT IS OPEN FOR ANYBODY TO BROWSE AND TAKE PART.
-
Welcome to our blog, if you believe in God
and this post, and then one day
-
And then one day 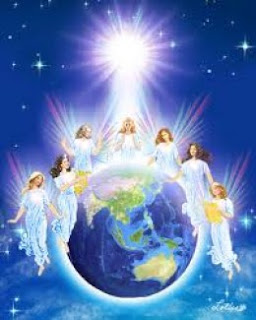 This is the angles poem that brought this happening about.


In ex-cel-sis De----------o.
---------------------------------------------------
And then one day
And then one day I had a real surprise, because my prayer above was really answered:
Incredible as it may seem to you this event I believe really took place and even surprised me, because while I was going to the local shops one very late afternoon just before sunset, I saw three people that I had never seen before on the footpath which I was walking on, they were fully dressed in simple tidy everyday clothes even though it was summer, and in summer time most men here wear shorts, while women wear flimsy clothes to keep cool. Looking back at this event it seems to me that these three persons were waiting for me to pass near them; and as I was approaching them two of them a man and a woman started walking towards me leaving the other man alone for their own reasons, so that I had to walk between them to keep going to this shop, they had to be from heaven, because what the man left alone on my left said to me no human being on earth could ever have known at that time.
GREETINGS TO THE AUTHOR OF RECONCILIATION OF THE UNIVERSE!
One of these angels that now was standing alone said to me with a courteous jest.
Thus I was greeted that late Saturday afternoon in 2005 and I was shocked!
Today, I have indeed to ask myself again and again, did this encounter really happen because I had written this Angels poem in my home computer and then later on I have written it in Hub-Pages or what could have been the reasons for this supernatural happening to happen? Perhaps it was because a lot of times I was thinking about the dreadful event of September 11 and that religion sometimes get it wrong and it needs to be changed if possible, because if religions could and would change, then religions could not be used to carry out those terrorist attacks.
But anyhow, when this supernatural event happened I was terrified from this sudden happening and moved away from these people or angels in fear; today I am still asking myself why I was so frightened and I hate myself for it.
Now, We have to stop to tell you about this supernatural happening, because we don’t want to run the risk of writing it twice and Hub Pages marks it as duplicate content, so, because this event has been described in full in a more detailed way, in a special place in the third and final part of these religious writings, where it would be easier to understand why this supernatural encounter has happened to me, since in that position it will make more sense to the readers, as we are going to write many other things associated with this event, this is the link if you want to read it now, Angels greetings. You see there are also other important reasons why this event happened. But now we want only to say that this apparition is what has really pushes me to continue to write these religious writings, since this was/is for me the proof of the existence of a higher intelligence in the whole universe and the proof that we are not alone. Now that we have told you part of this special event, let us explain again why we are writing these articles.
--------------------------------------------------
Why we are writing these articles.


These religious writings are being written in good faith for the future benefit of mankind. In these religious writings we are in search of ourselves in a religious way, they are also a study of religions, because for us to write them we have first to study religious issues, after studying these religious issues and religions, we hope that at the end we would come up with a theory how to fix those faulty religious issues, you see, sometimes we human feel that we have lost the right way, see what some religious extremist can do in the name of God and religion, so we are writing in the hope that we could find ways to stop or minimize them. At the same time we believe that we could help ourselves and religions. First of all we would be looking for religious options that could improve links between religions; perhaps we would be able to achieve that by suggesting how to modify some religions or religious meanings, we would like to do that because that is what seems to be missing in religious circles. In our last article we have talked about, religious options of the future; and before that why Man needs God, in this article we will continue to search about God and religious and spiritual beliefs, this is the main theme of this article and all other articles associated with these religious writings.
We know that you might be saying that these religious writings could have been started with this Angels poem that we have written in this article above, so that it would have attracted the attention of the readers more easily; Anyhow we have moved this poem in the middle of our fifth article here, because we needed to explain other religious things before we came to this poem, we have also other reasons to hold it back a bit.
We know we could have used this angel’s poem to start these religious writings, so that any reader could have been able to understand at a glance what they would find in the following pages of these religious writings. They could have been the preamble of these religious writings, which are going to be written from here on, and they show clearly that these writings will be talking about, as they will be talking about God our benevolent heavenly Father, and religion and lots of other heavenly things, and this is mostly what you will find written within the pages of these religious writings, since they mainly will speak about God his angels and heaven and what’s there within, we will also try to show you how everything could link together forming an ever ending cycle of the spiritual life of the universe.
Here I have to say that I firmly believe that I am writing in God’s name, not only because of what I have heard and seen during my life, but also because I believe that only the existing and active God life force can lead anyone like me to write about religious articles, even though they are so hard for people like me to write. And from the bottom of my heart I hope that my religious writings could one day serve God and help humanity understand God’s will, or at least improve the religious knowledge of what’s known today.
Of course we are all earthly human beings, and because we are earthly human beings there will be unavoidable earthly things to be also discussed, and therefore, they will have to be discussed here within these religious writings; but they are going to be only those things that with God and heaven link, so, we will try hard not to write any other earthly things that is not part of religious writings.
So, to whosoever will read our religious writings, God will help them to understand and believe in the right things, since God is greater than anybody thinks, as He is beyond any human understanding.
So, please drop every earthly thing from your mind and listen just for a moment for your own sake, because this is the good news for all human beings. You see God is offering us the most beautiful thing in the world, since God is inviting us to save ourselves forever, if we willingly try to find our own way on how to stay with him or go back to Him. Therefore dear readers and believers, it follows that if one wants to live a good earthly life according to God’s will, and then live the eternal heavenly life in the presence of God , one must believe in God and follow God’s ways, so one must try to do what God wants one to do all the time; which is that one must try to be in touch with God life force all the time, and if one wants to be in touch with God life force, one must be pure at heart, and even that might not be enough; but there is certainly one way that can help, and that way is that we should ask God for forgiveness of our sins, and then we should pray God, pray and pray, because to be in touch with God life force it’s the only known and sure way.
So let us say just a very short prayer; Almighty and benevolent Father forgive us all our life sins, and guide us according to your will, so that we will be worthy to be your servants, Father hear our prayer, amen.
Anyhow, now let us pray God for inspiration;
I believe that we have said enough in this post, so see you in our next post, Praying God for inspiration

And then one day